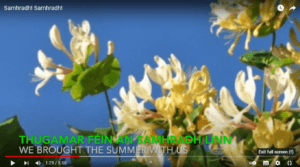 This ancient Irish May Day song – for today!!! Lá Bealtaine – has been beautifully compiled here by John Ward of the Racontour (www.racontour.com). Fittingly, the song has some Ukrainian references. When I was recording my album Crimson Moon (2018) I got the idea of interpolating a Tchaikovsky piece into the arrangement. This came about when I realized that several melodic phrases in the introductory part of the Andantino simplice to his 1st Piano Concerto were almost identical to phrases in the song. The Russian composer frequently used Ukrainian folk tunes in his works. In this case, he uses a simple, expressive melody beautifully decorated like the floral offerings of the Irish May-Day children. Tchaikovsky’s music, like the song itself, is absolutely glittering in sunshine. The recording is further enhanced by the superb musicianship of the three Henry Girls of Inishowen – Lorna, Karen & Joleen – with further colourful inputs from Aidan McLaughlin and Thérèse McKenna.

Thugamar Féin an Samhradh Linn (“Samhradh! Samhradh!”) was sung by groups of children in 1662 to welcome the Duke of Ormond to Dublin as the Lord Lieutenant after the Restoration. It was sung again in 1689 when Patrick Sarsfield and King James landed at Kinsale. Although it displays a certain modernity, derived from continuous oral tradition, the medieval origins of this May Day song are plainly visible. Musically, it resembles the French estampie and verelai. Its wide melodic leaps of a sixth are typical of other music from the medieval period.
In Co. Louth, this song, within living memory, used to be sung by the youths and maidens on May-Eve while they carried around the “May-Baby” (Bábóg na Bealtaine) from house to house. 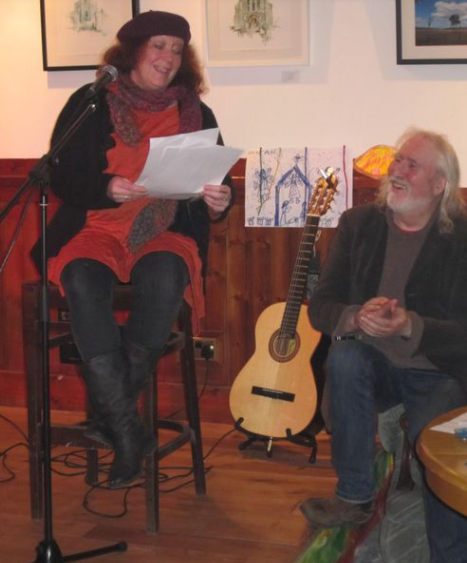 A lovely memory. Kathryn reading; Seoirse lapping it up! Sad to think our community in Moville still hasn’t got another art centre.
Anchor Arts was such a vibrant grass roots focal point for a very diverse group of artists, musicians, crafts and environmental activism.
Someday…

“Below the Surface -Postcard book from Kathryn Daily” 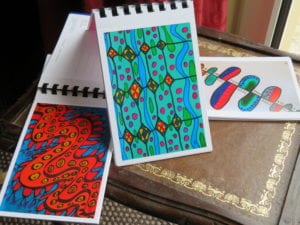 “Below the Surface” collects together 20 vibrant original works all beautiful, simple and eloquent….

VISIT THE SHOP ON THIS WEBSITE FOR FURTHER DETAILS 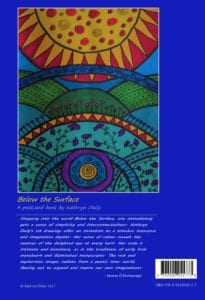 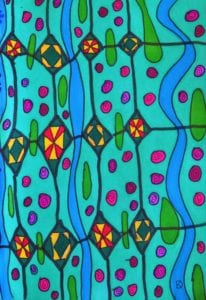 This is a bit of buried treasure, just recently unearthed.  The extraordinarily talented harpist, Michael Rooney of Monaghan, asked me away back in 1997 if he could use my record label to promote his new album “Ocras – Music from the Famine Remembrance”. It’s an album brimming over with his own compositions, helped along the way by a dozen or so fine traditional musicians, including the vivacious Rhatigan sisters (harpers all three), Colette McDevitt’s gorgeous sean-nós singing and Eileen Kennedy’s breezy flute. (Eileen Kennedy, Colette McDevitt and Catherine Rhatigan used to teach with me at Scoil na Mainistreach in Donegal Town.)

In addition to the record label, Michael and the gang asked me to do a painting for the CD cover. I did so using the image of a decaying potato field. Unfortunately I didn’t get time to photograph the image and the painting subsequently disappeared… rather mysteriously! Michael was very apologetic but, fortunately, he did actually have it photographed for the cover before the painting vanished. This is it.

I met a fairy woman at Lachtnacooey in Glentogher recently. I asked her if there was any hope at all that we can get rid this deadly Covid virus. She shrugged her shoulders is dúirt sí os íseal i mbriathra soineanta sámh

“Nuair a théid sé fán chroí, cha scaoilltear as é go bráth…but if you paint my fairy tree I’ll see what I can do.”

This is the largest painting I have produced since the 1990s.

Dr Iain C. Phillips of Amsterdam | London has created a web-site cataloguing all the available recordings of Schubert’s Die schöne Müllerin. He invited Seoirse, along with five other artists, to populate the “Art” section with his Die schöne Müllerin series of 20 paintings from 1996. At first, Seoirse only wanted to contribute a selection but Iain was so excited by the works that he requested the entire set. You can jump in straight into the gallery with this link: This was the painting chosen by the editor for the cover of the Maynooth University Yearbook (Bliainiris 8) in 2008. The title is “Caisleán Ghleann Ó gCanannáin, Tulaigh an Rí: Feilim” (Glennagannon Castle, Tullynaree, Carndonagh: Felim [of the 4th Race]. It was one of 17 paintings from the series called Seacht Sliocht Uí Dhochartaigh Inis Eoghain (The Seven Races of Inishowen O’Doherty), from the same year. It is painted with acrylics and metallic markers on black board. I think the choice of a green background by the book designer was quite judicious. It sets off the image well.

Like many of my fellow-students at the Ulster College of Art, I eventually pursued a career in teaching from 1971 onwards and quickly abandoned the idea of becoming a full-time painter. Precious few graduates I knew continued to paint or sculpt. One friend, Vernon Carter, who actually went into teaching at the same time, managed to continue as an artist; it became almost a daily routine for Vernon to draw and paint and make sculptures. I don’t know how he did it because teaching can be extremely exhausting.

I did dabble a bit with brushes at weekends but to no avail. However, I thought continually about art and I’m glad I did because after more than twenty years of, in the practical sense, shilly-shallying around the subject I managed to conflate my thoughts with certain lines of poetry. These lines were not from poems per se but from song lyrics describing the microcosm of the Irish landscape. I had been singing these songs for years and always thought that some of them were very “painterly” indeed. It was time to look seriously at these lines and produce some landscapes that were, perhaps, less representative and more impressionistic. If I used an intensification of colour in these paintings they could even be termed “expressionistic”, and if I deployed the techniques of Jackson Pollock and Marc Rothko I could be leaning towards the abstract in some of them. In 1993 it all happened. My first one-man shadow opened in the Duke Gallery of Dublin in October of that year.

“I listen to a song or a piece of instrumental music and something comes into my mind. I start painting.

In the case of a song, it’s not just the words but whatever mood the music suggests: the rhythm, the instrumentation, the melody, etc. Ultimately, it’s the totality of the experience that assails my senses.

If it is a particular poetic image that sticks in my mind the outcome may not be a photographic representation of that image but a response to the musical mood in which the image is cradled – words and music and paint become one and the same entity.

This process allows me to be abstract at times…but not detached from the emotional pull of the music. It’s a human response to the beauties of the world. I suppose I’m very romantic in that respect!” 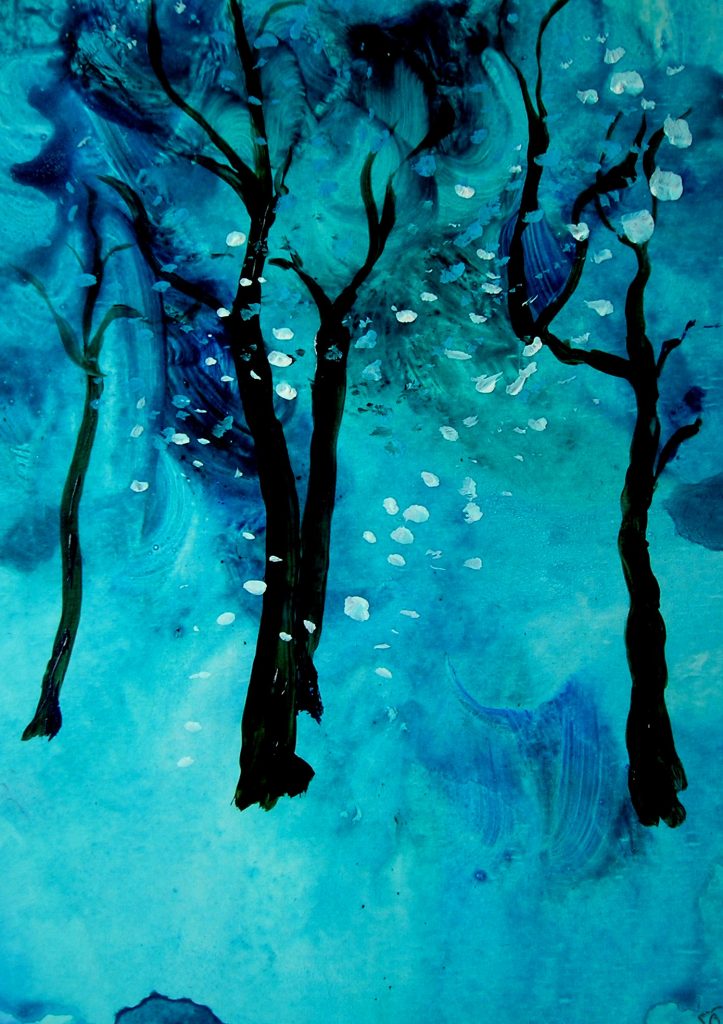 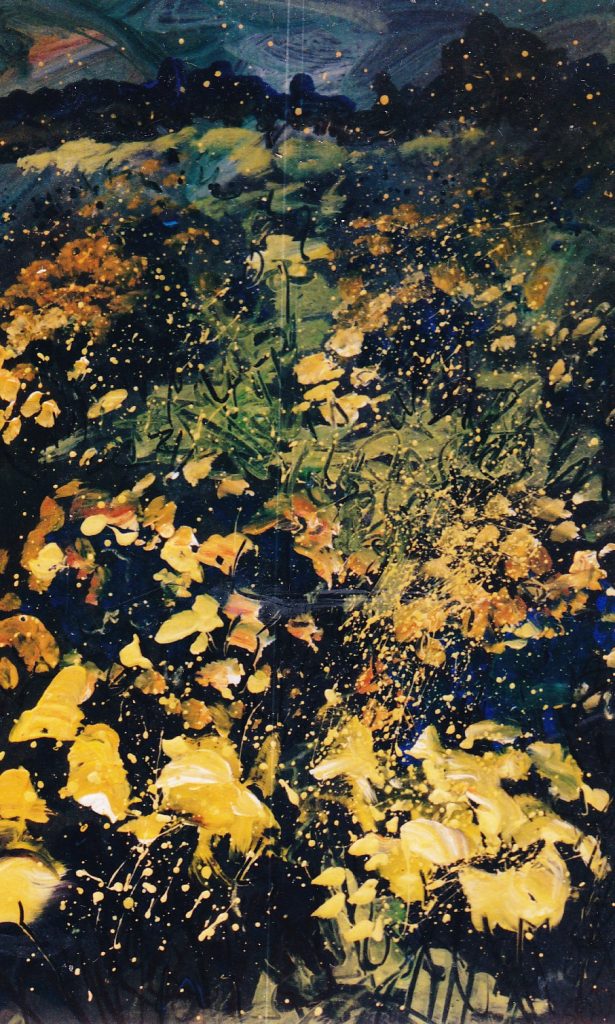 Ballyshannon: Images from the Age of Innocence (2008) 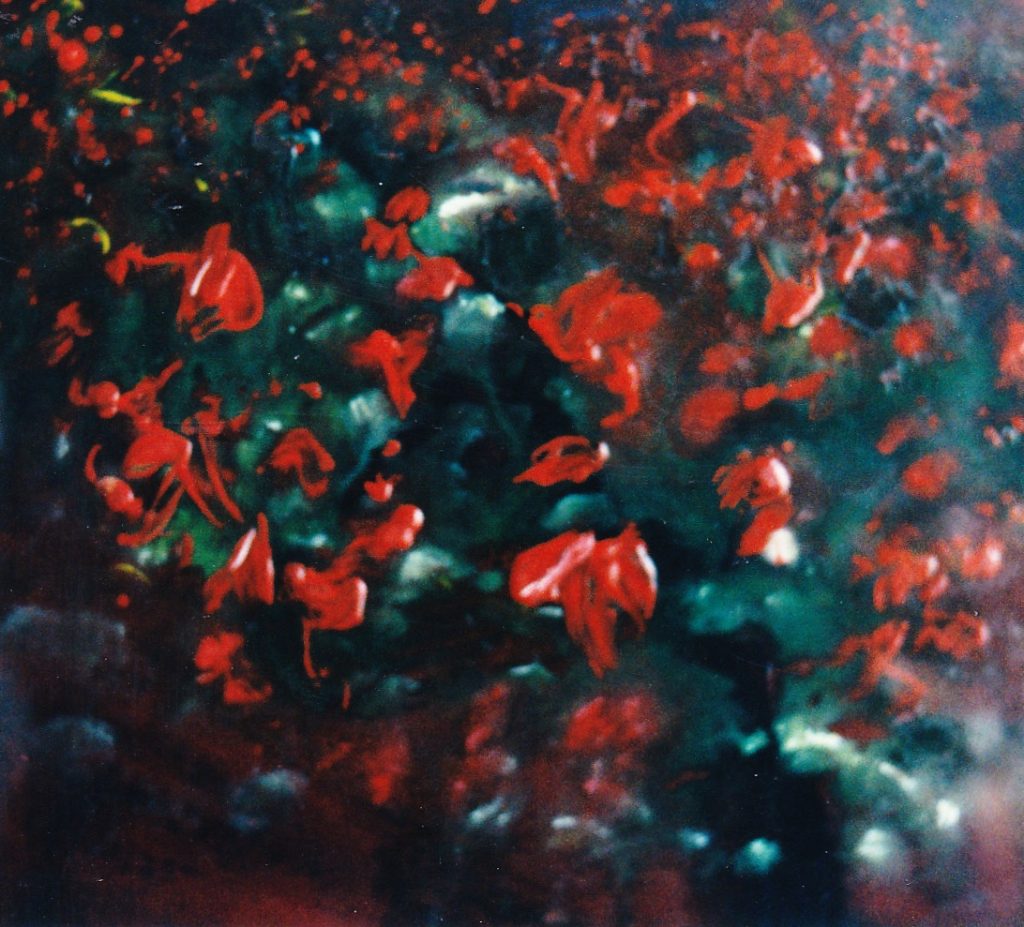 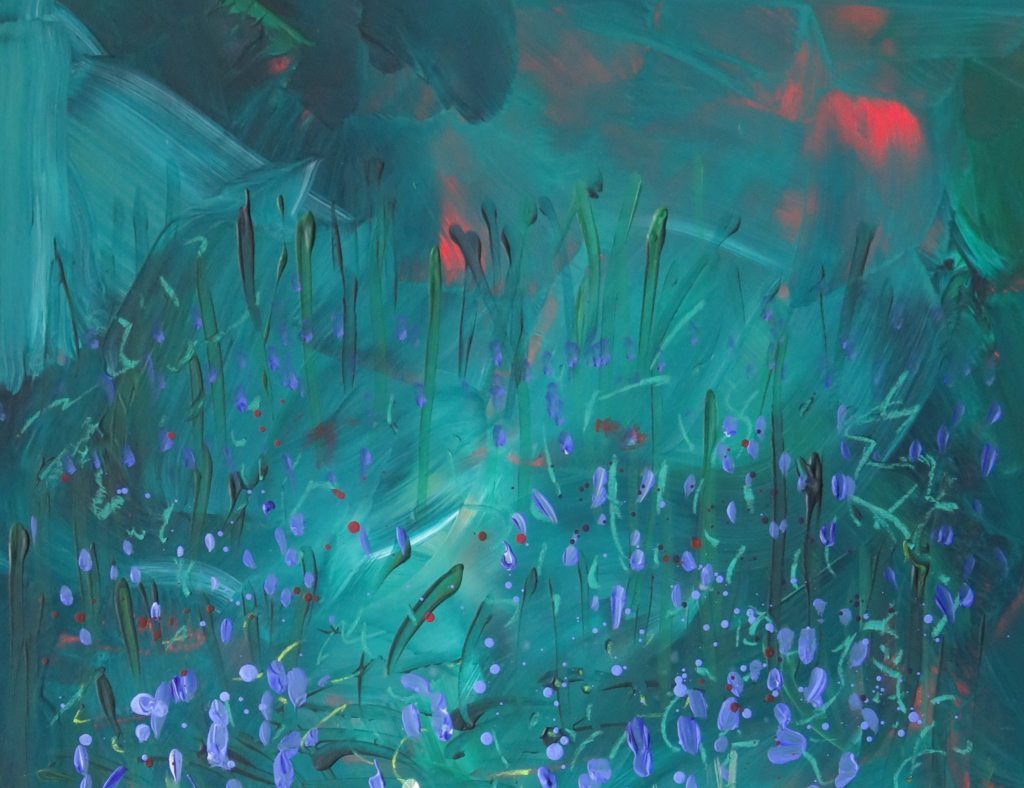 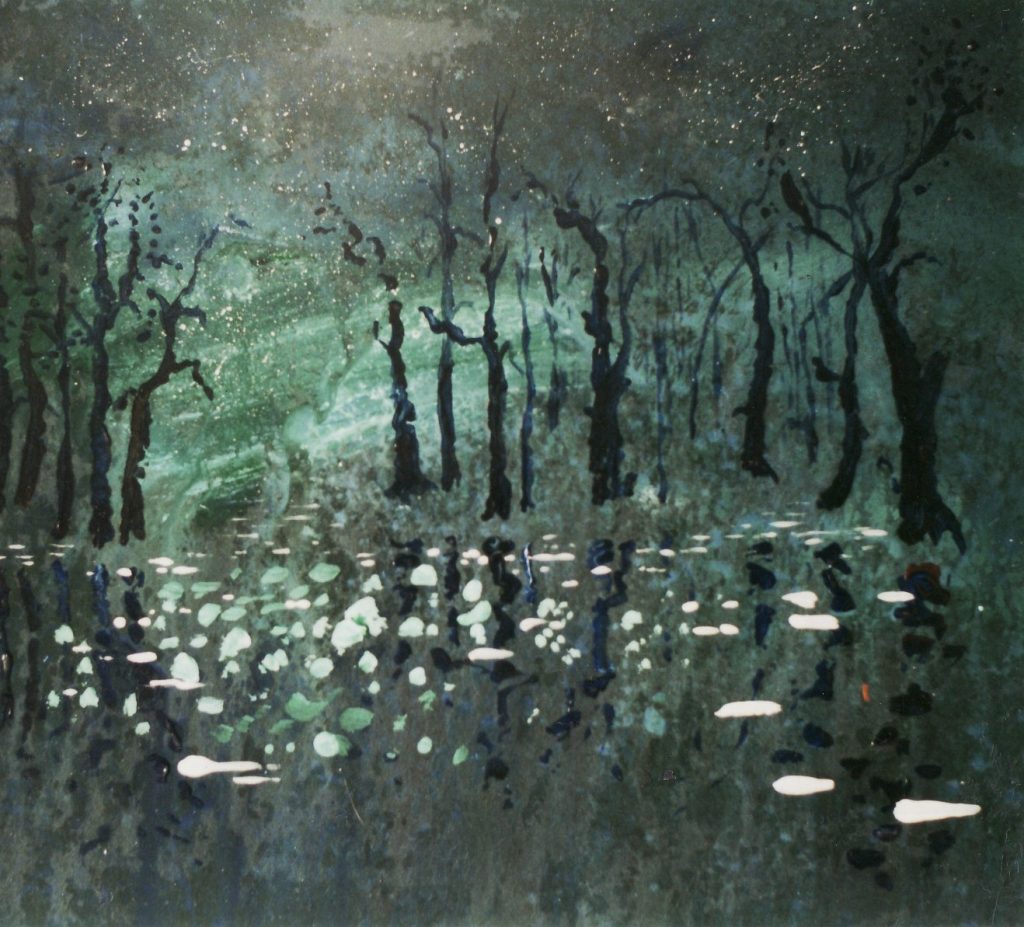 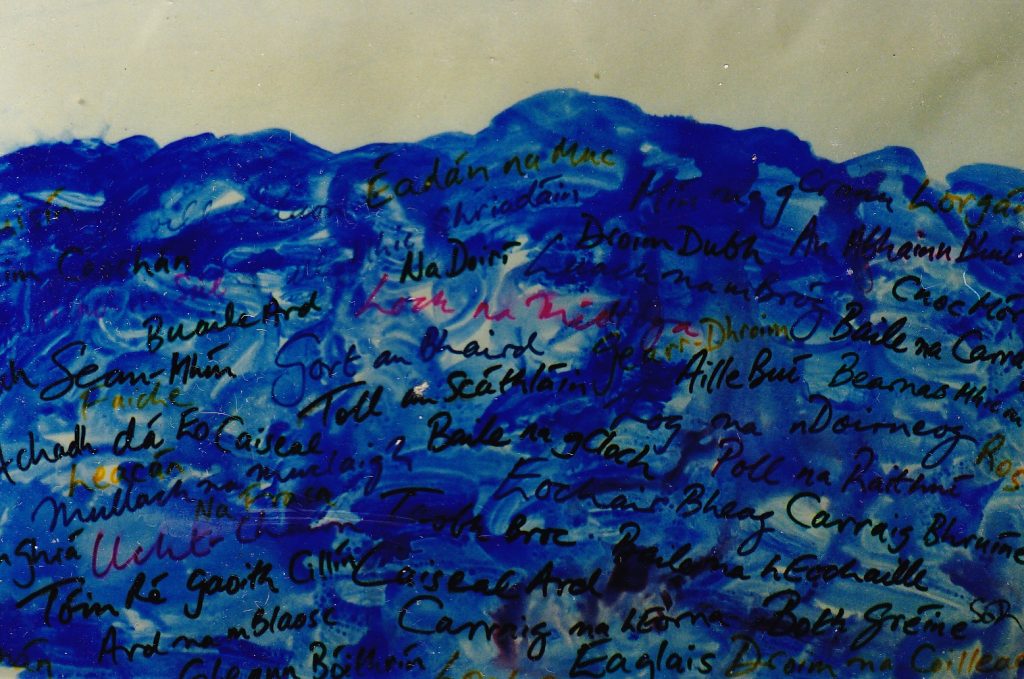