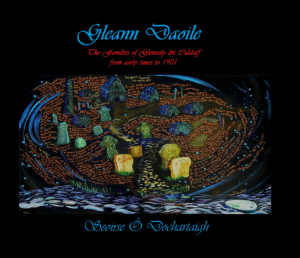 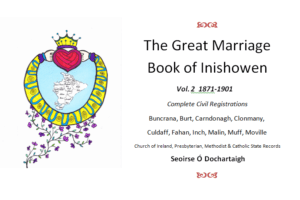 GREAT MARRIAGE BOOK OF INISHOWEN, VOL 2 (1871-1901) – DIGITAL VERSION NOW AVAILABLE!!!
€20
Many people have been asking to purchase copies of this second volume. The truth is it is too expensive to print (nearly 2 inches thick and in A3 format) and very, very expensive. I only printed 50 copies all of which sold out quickly. I have decided now that such was the demand that I can offer you a digital version in a Word Document – the entire book – for €20. No postage required, of course, as all you have to do is go to “SALES” on this website and pay your €20 through the PayPal system and leave your email address. I will then email you the document. One advantage in the digital version is the “Find” facility on the top right of your document. Type in “Farren”, for example, and it will trawl through the entire book and highlight every Farren mentioned there.
ENJOY EXPLORING YOR FAMILY HISTORY!!! For this final 5th Edition, Seoirse discovered some fascinating Mariner’s Maps that date from 1776 and has reproduced extracts in the book. They are the equivalent of Google Satellite images showing, for one, what the Buncrana district looked like then: surprising, lots of tree-lined avenues. The houses depicted look quite substantial too – not a hint of Mica! Many people already have previous editions of the place-names book so he doesn’t expect people to rush out and purchase this one but many who don’t have been asking for copies and he had run out of supply. This time Seoirse used a local printer, Foyle Press of Carndonagh, and they have done an excellent job with full-colour maps and photos. The format is the same but there was a good deal of fine-tuning involved plus an additional batch of previously unknown place-names.

The book will be available soon at Mac’s Books, Buncrana; Supervalu, Carndonagh; Gillen’s, Moville; Centra, Muff; Callaghan’s Gala , Burt. You can also purchase it at www.seoirse.com

The books I have written so far celebrate the place where I live – the home of my ancestors: Inishowen.

I have researched its castles, its place-names, its surnames and personal names; I have crafted a portrait of an Inishowen town – Buncrana – from the time of the famine to the 1960s. It’s a piece of social archaeology.

Lately, I have created a work that isn’t specifically about Inishowen but nevertheless may be of interest to the music-lovers of the peninsula, certainly to the rest of the nation – a book called “Sunlight & Shadow” about our forgotten composers.

STORY-TELLING : THE ORAL TRADITION…LONG BEFORE BOOKS…

The above clip is taken from a documentary called “Roots of a Man” (2005) made by  young Toronto film-makers Matthew & Jeffery Campagna whose Inishowen ancestry (Ó Dochartaigh) led them to the peninsula in search of the their roots. Seoirse accompanied them during the making of it. He is sitting here in the dungeon of Castle Ross on Inch, one of the remaining Ó Dochartaigh strongholds, perched dramatically on a cliff on the southern shores of the island.  The full story of their journey is available at www.rootsof a man.com The book is now in all good bookshops all over Ireland, including Mac’s in Buncrana and Supervalu in Carndonagh. It can also be purchased on-line through the Red Stripe Press web-site. This clip was filmed in the Gaeltacht of Teileann  in south Donegal  as part of a special feature on “Ardán” on TG4 in 1998.