One can, imaginatively at least, revisit almost any town in Ireland and find an iconic moment in its past when the town came into being. To reach the point when the town was born, or given a name, requires the stripping away of all the buildings, houses and bridges right down to the essence of the place, to the almost primeval, rainforest  version. Was there ever, I wonder, a particular stage in Ballyshannon’s past when it could have been called Assaroe, or Inishsaimer, or Asscathleen? And is there a connection between the legendary Ceithleann of Inis Ceithleann [Enniskillen] and our local “Cathleen”?  Should, indeed, the name of the falls have been Eas Ceithleann, anglicized to Asskillen? These questions can only be answered by the historian steeped in ancient legend and “Dinnseanchas”. I am only a painter. I have attempted here – not necessarily with any degree of topographical accuracy, because the shape of the land can change too – to reach what I call “the age of innocence”.  Not necessarily the place before, as James Joyce put it, “the hand of man ever set foot”, because someone, some person, probably built the ford over the River Erne giving it the name Ballyshannon/Ballyshanny – Béal Átha Seanaidh –The Mouth of the Ford of the Slope. But could the builder have been a person called Seanadh? If so, the translation might be The Mouth of the Ford of Seanadh. The jury is still out. The ford itself probably wasn’t a natural phenomenon. But one can never be too sure about that either!

I hope these four images from Ballyshannon’s history that I have painted – having consulted old maps, photographs and local histories – bring the viewer back to that iconic moment. 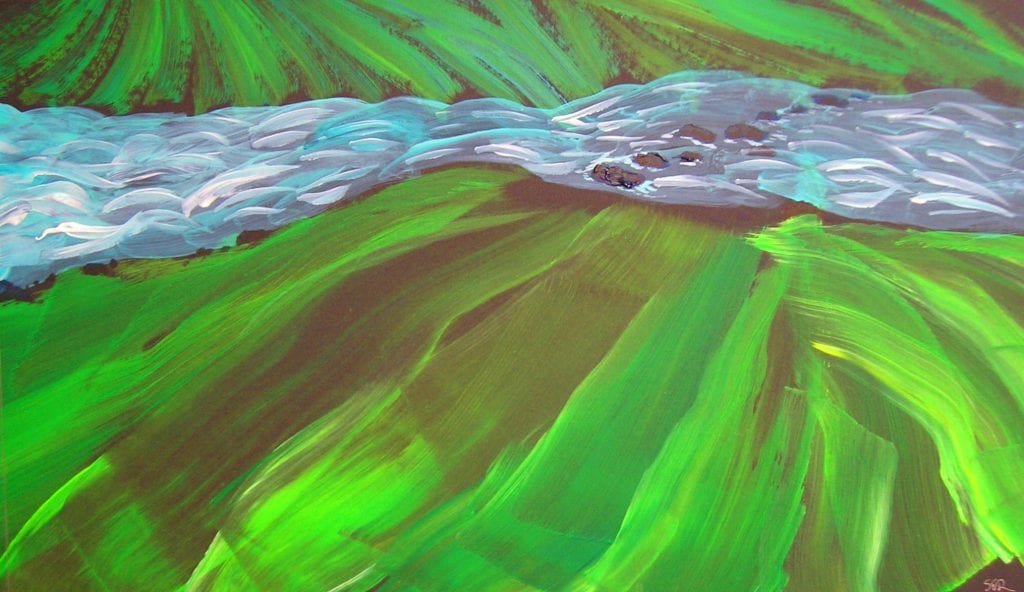