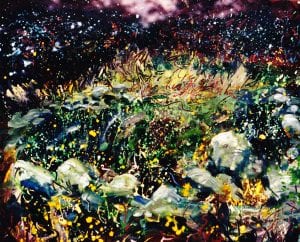 The lecture ‘From Rothko to the Rosses‘ gives a magical and musical insight into his works of art to date, discussing the different painting styles that had influenced him as a student at the Art College in Belfast during the 60s. It was the American painters, Jackson Pollock and Mark Rothko that greatly influenced his art.

Also inspired by old Irish songs and poets from Donegal, Seoirse gives a live musical performance on the songs that have strongly influenced his works.

This talk was given at the Tenth McCracken Summer School in Belfast in 2009.